On Saturday I visited the FDR Presidential Library in Hyde Park, New York. I had already visited seven other presidential libraries. Bush 43, Clinton, Bush 41, Reagan, Carter, Ford and Johnson. (I wrote about my visit to the Clinton Library here).

The FDR library was very impressive. Roosevelt faced so many things in four terms. The great Depression. The new deal. The Second World War. Etc. It was difficult to condense everything into a few pieces. In contrast, the Carter and Bush Libraries 41 felt like they were working hard to fill large spaces. One-termers just don’t have as much to show.

In this article, I will highlight how the museum handled Supreme Court matters during FDR’s tenure.

First, there was the hammer used to announce the appointment of FDR in 1932. If you squint, Robert Jackson signed the plaque as secretary. 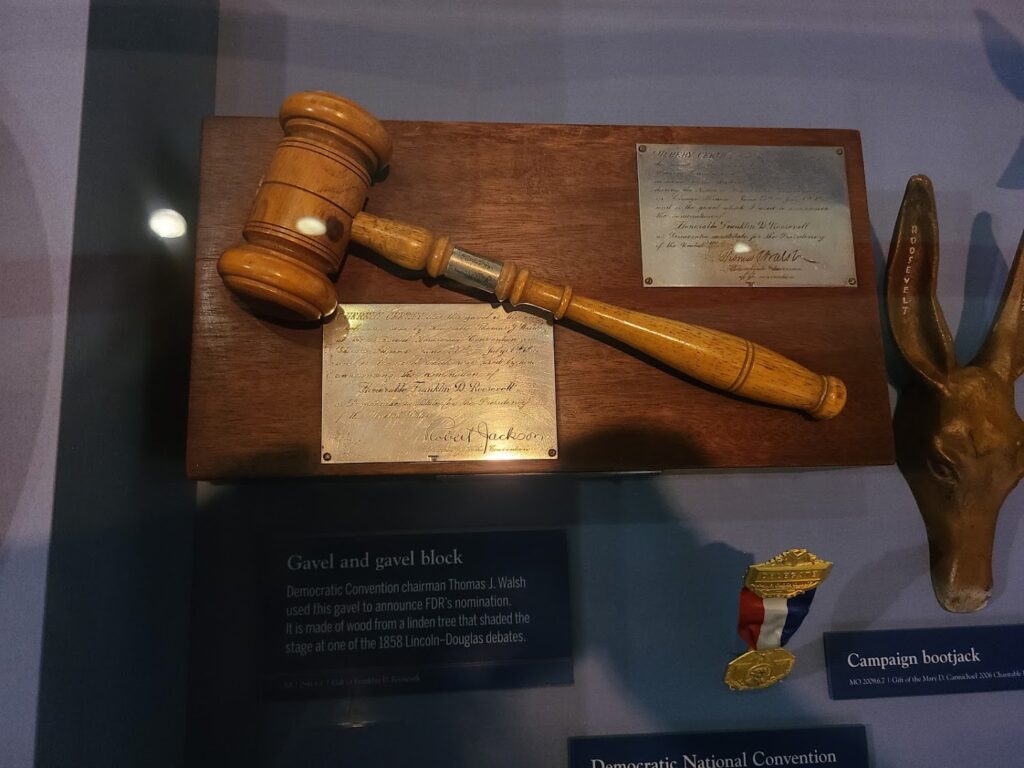 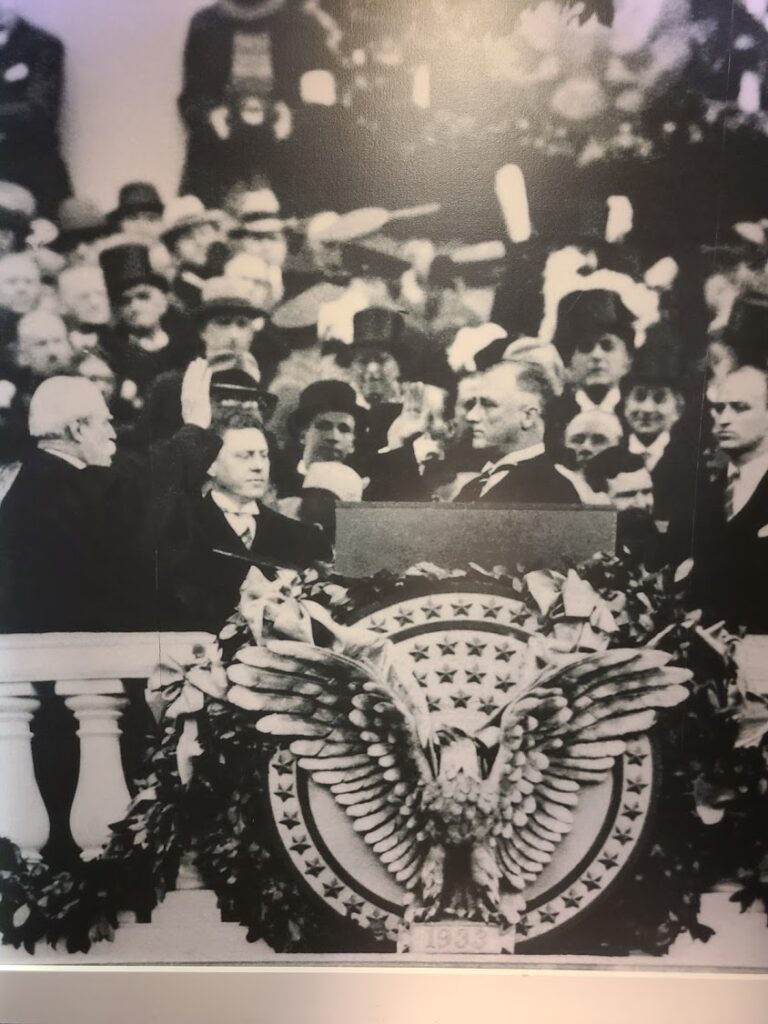 Third, there was an exhibition on the first 100 days of FDR. The descriptions were refreshing and balanced:

Some FDR initiatives have been successful. Others have failed. Some programs were contradictory. 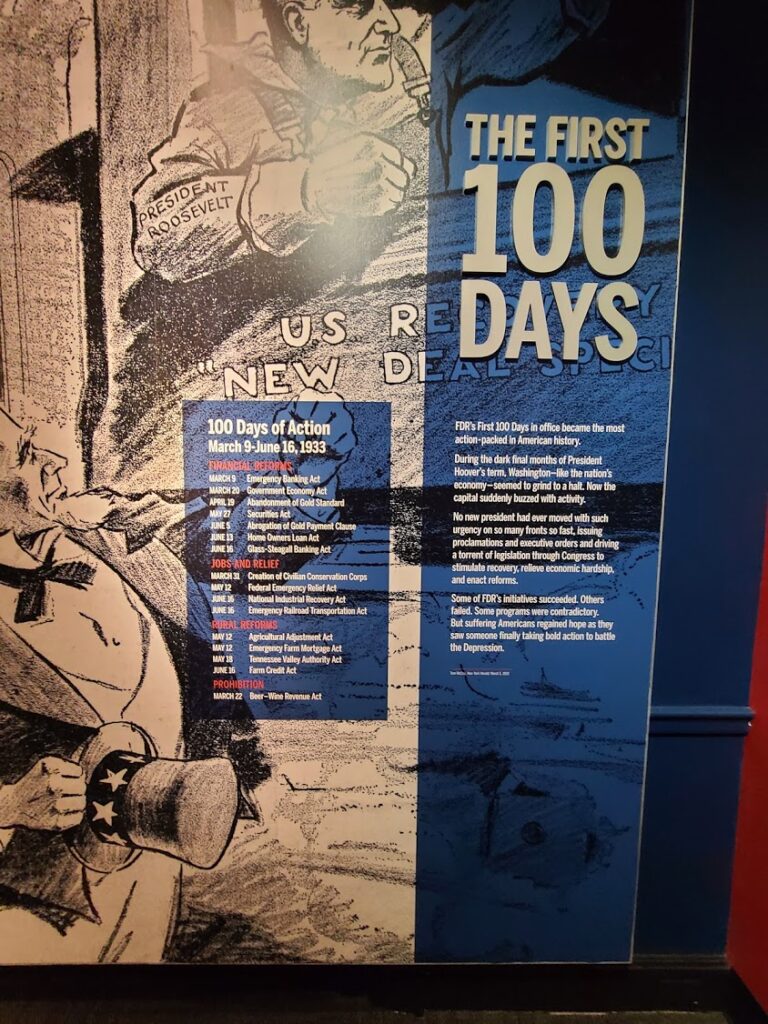 Fourth, there were several photos on the National Industrial Recovery Act (NRA). 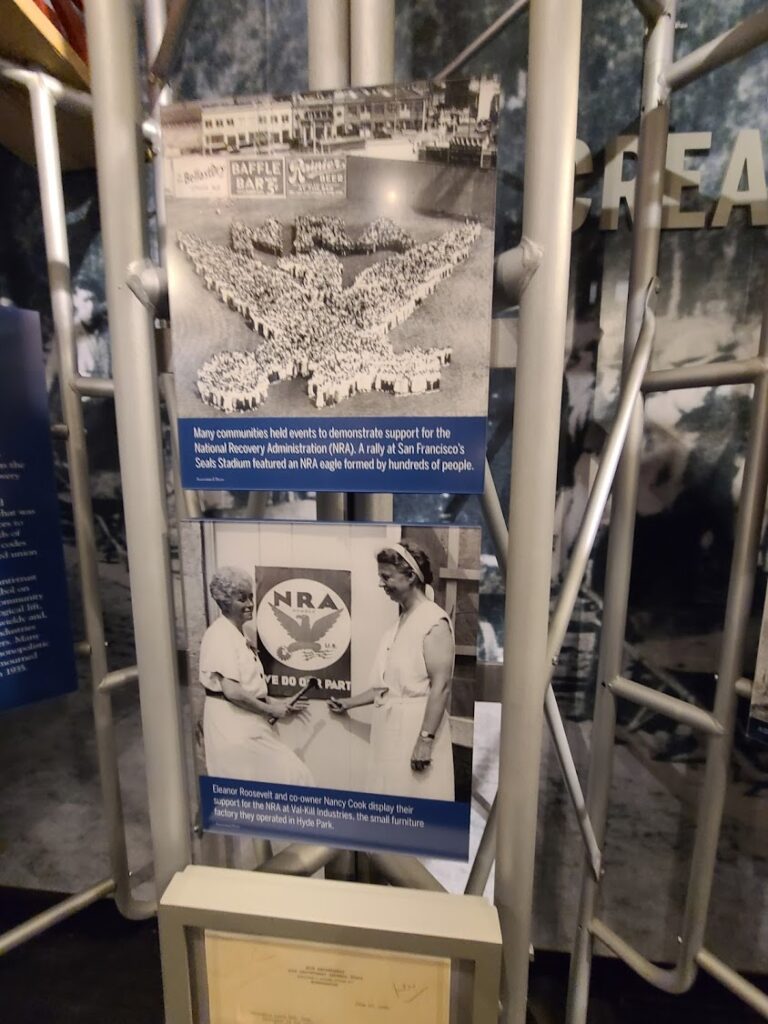 And the exhibition offered this description of Schechter poultry:

. . . but the NRA proved ineffective. Its codes were cumbersome and at times ridiculous, including regulations for industries such as epaulettes, dog food, and slapstick theaters. Many codes favored large corporations and encouraged monopoly practices that hindered economic recovery. Few people cried when the NRA was declared unconstitutional in 1935. 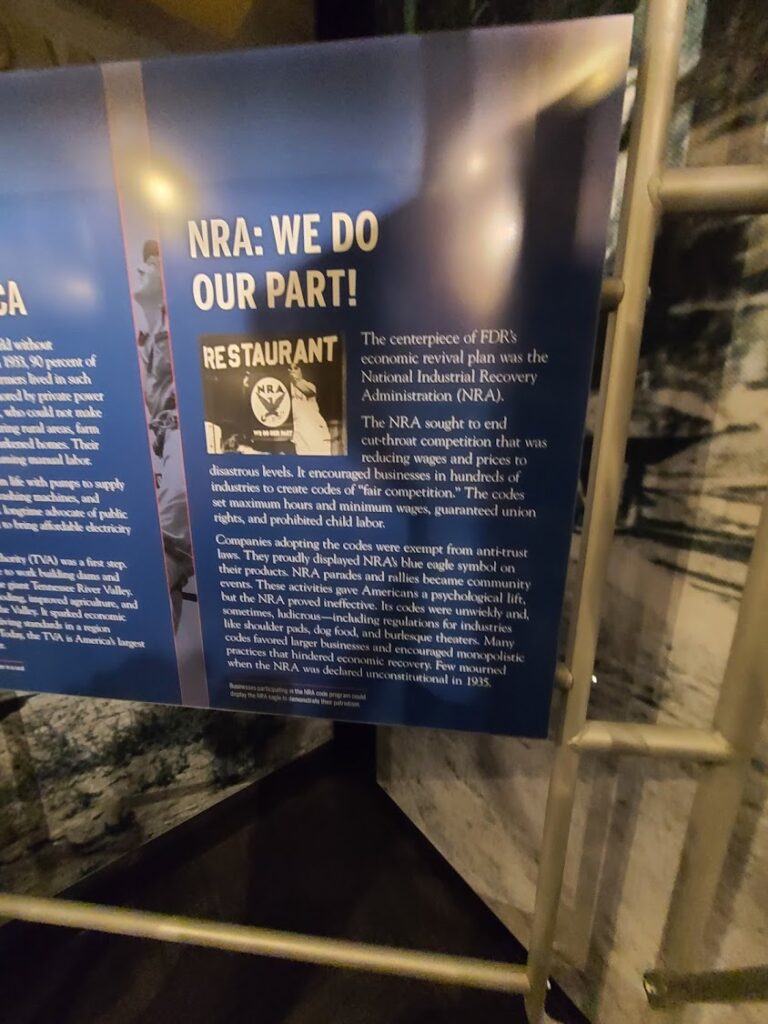 Fifth, there was an exhibit that dealt with the packaging of the court during FDR’s second term.

But FDR’s plan quickly took a turn for the worse. Red with victory, the emboldened president crossed the line. A confrontational battle with the Supreme Court and an unsuccessful effort to â€œpurgeâ€ conservatives from the Democratic Party energized his opponents. 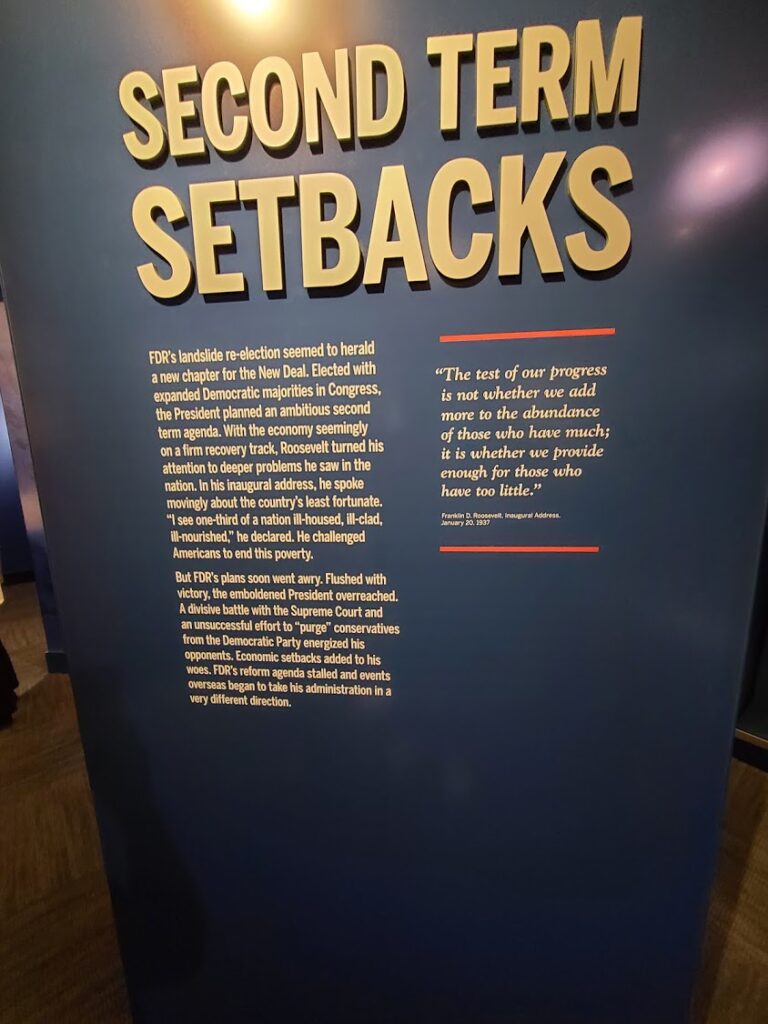 The next panel was titled “The Battle of the Supreme Court”.

During FDR’s first term, the Supreme Court became a major threat to the New Deal. A conservative 5-4 majority in the court disapproved of Roosevelt’s expansion of federal power. In 1935-1936, these judges began to strike down key New Deal laws, including the NRA and AAA, for being unconstitutional. FDR feared that future decisions would reverse other reforms, including social security.

Mostly precise. Schechter Poultry, which the NRA said, was 9-0.

In 1937, Roosevelt decided to remake the Court. He called for a law allowing him to add up to six new judges for every current judge over the age of 70. Indignant critics have accused him of wanting to “pack” the court. The Senate buried FDR’s proposal in committee.

This passage underestimates how strongly members of the Democratic Party opposed the plan. Both houses of Congress had a large majority of Democrats.

The outcome of the court battle was FDR’s biggest legislative defeat. but it became evident that while he was losing the battle, he was winning the war. In 1937, a Conservative judge changed allegiance and began supporting New Deal legislation. This change – and later court retreats – allowed FDR to form a pro-New Deal majority without drastic change.

This passage is part of the story of “Switch in Time” which has been demystified quite conclusively. And the so called Judge Roberts’ switch has taken place West Coast Hotel, which involved state law rather than federal law.

And here is the kick:

From 1937 to the 1990s, the Court consistently supported a broad interpretation of federal power in the economy.

So far, but no further. 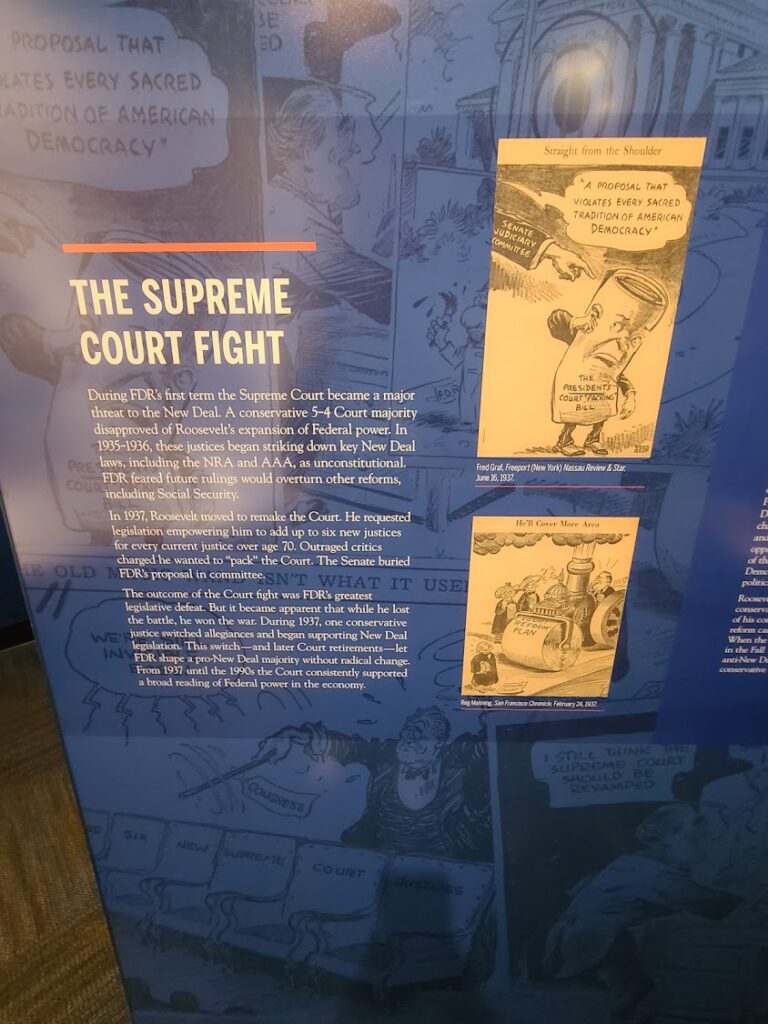 There are also two political cartoons. One represents the Senate Judiciary Committee telling the president that his proposal “violates all the sacred traditions of American democracy.” Another cartoon shows Roosevelt driving a steamroller, labeled “Court Reform Plan,” ready to crush a Supreme Court judge.

Sixth, there is a large exhibition on the Japanese internment. To the library’s credit, the exhibit acknowledges that the threat of Japanese sabotage has never been proven:

In the uncertain weeks after Pearl Harbor, many Americans, especially those on the Pacific coast, feared enemy attacks and saw danger around every corner.

These fears, combined with racial prejudice, have led to great injustice. In early 1942, civilian and military leaders on the West Coast accused members of the region’s large Japanese-American community of working with the Japanese military to plan acts of sabotage. Although no serious proof of this has existed, they pushed the Roosevelt administration to act.

On February 19, 1942, the FDR issued Executive Order 9066, which led to the forced relocation of approximately 120,000 Americans of Japanese descent living on the West Coast. More than two-thirds of those people were US citizens born in the country. They were confined to inland internment camps operated by the military. 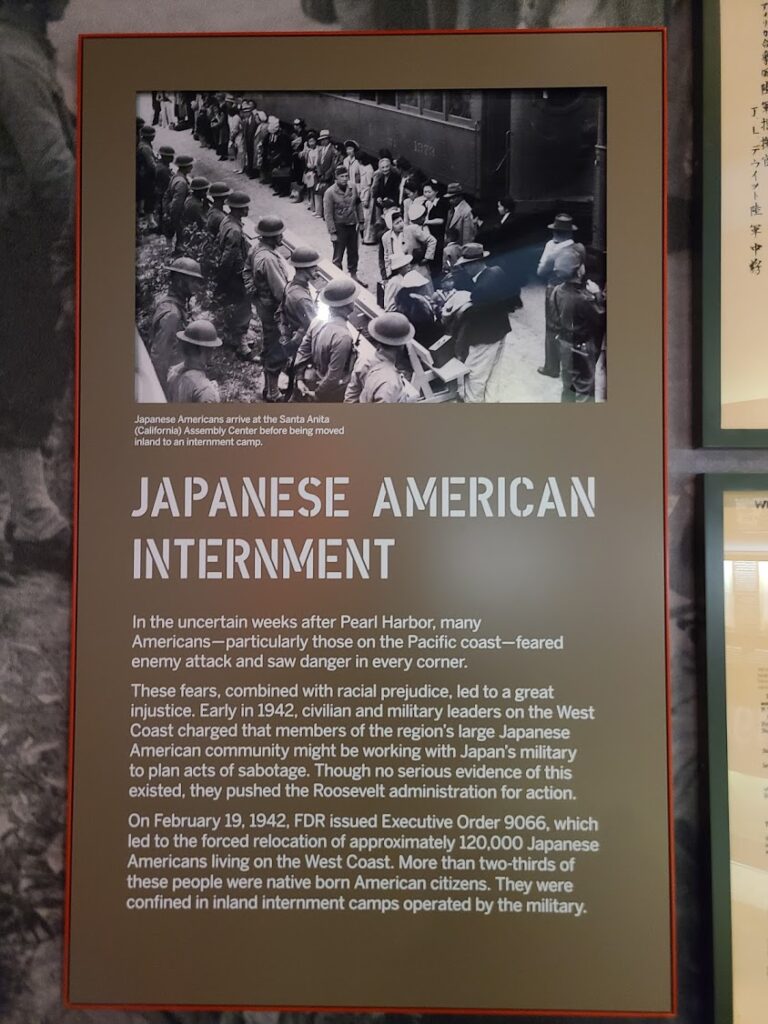 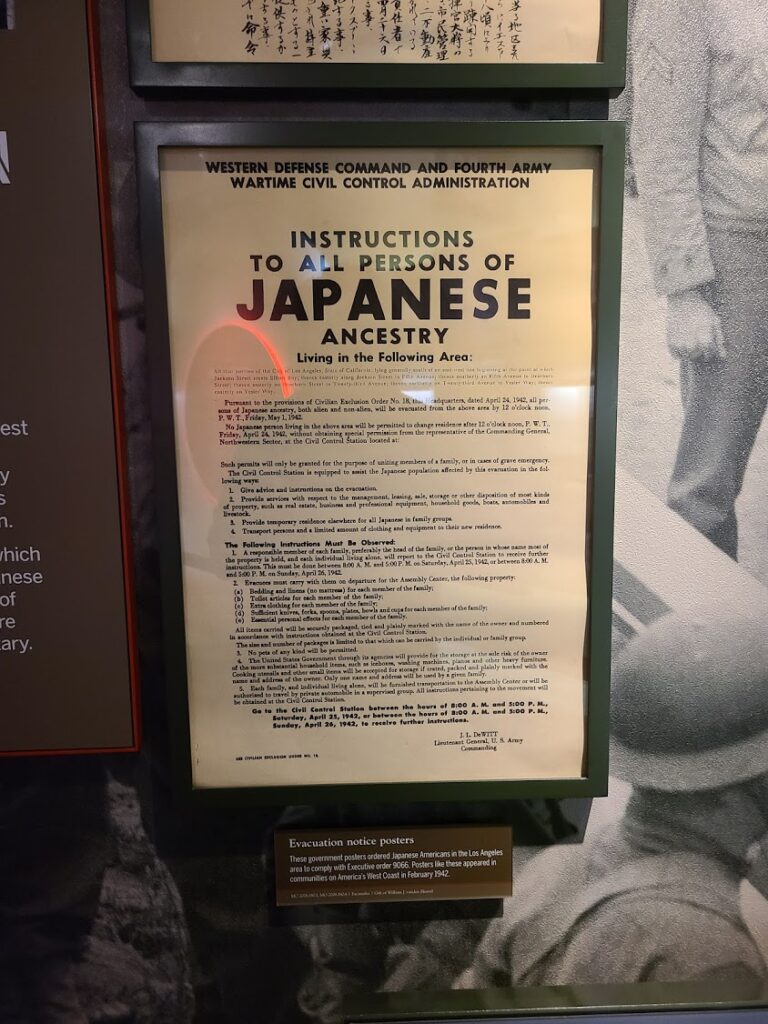 Eleanor Roosevelt opposed the internment and tried to prevent FDR from issuing Executive Order 9066. Concerned about the potential hysteria against Japanese Americans, she visited Japanese American communities and praised their patriotism . But when she discussed the matter with FDR, he didn’t budge.

ER has not spoken publicly against her husband’s decision, preferring to work quietly behind the scenes. But many in the Japanese American community knew his sympathies. In April 1943, she visited the Gila River resettlement camp in Arizona. She was impressed by the character and perseverance of the inmates. In a report to FDR, she urged it to relax the order and allow detainees to return to their homes. The ER report helped convince FDR to explore the release of some with work permits. By the end of 1943, a third had been released from the camps. However, it was not until January 1945 for the executive decree to be repealed and for all internees to be released. 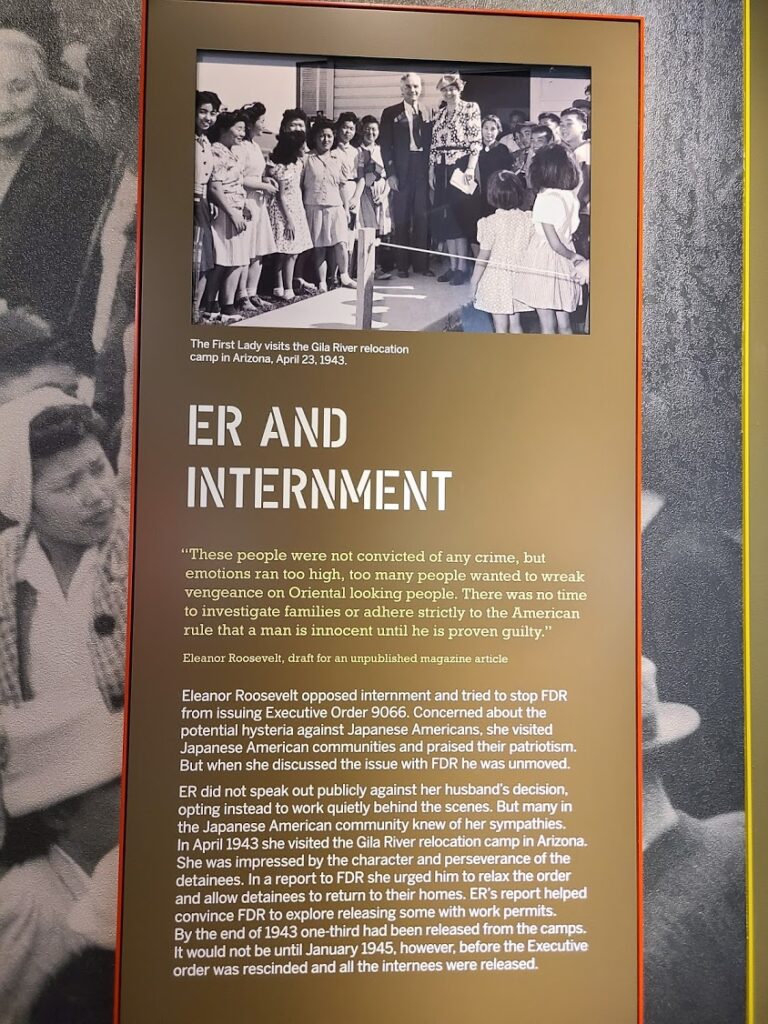 I discussed the public defense of internment by Eleanor Roosevelt in a 2015 blog post.

As far as I can remember, the name Fred Korematsu did not appear anywhere in the exhibit. There were opaque references to Korematsu and Hirabayashi like “two cases of war”, but nothing on Ex Parte Endo:

The Supreme Court upheld the presidential decree in two war cases. But in the 1980s, the United States Congress recognized this blatant violation of the civil liberties of American citizens and voted in favor of financial compensation for those confined to the camps. The Supreme Court also overturned its previous wartime rulings.

This last sentence is puzzling. Does the exhibition refer to Trump vs. Hawaii, who declared Korematsu annulled by the “Court of History”? I’m not quite sure what’s going on here. 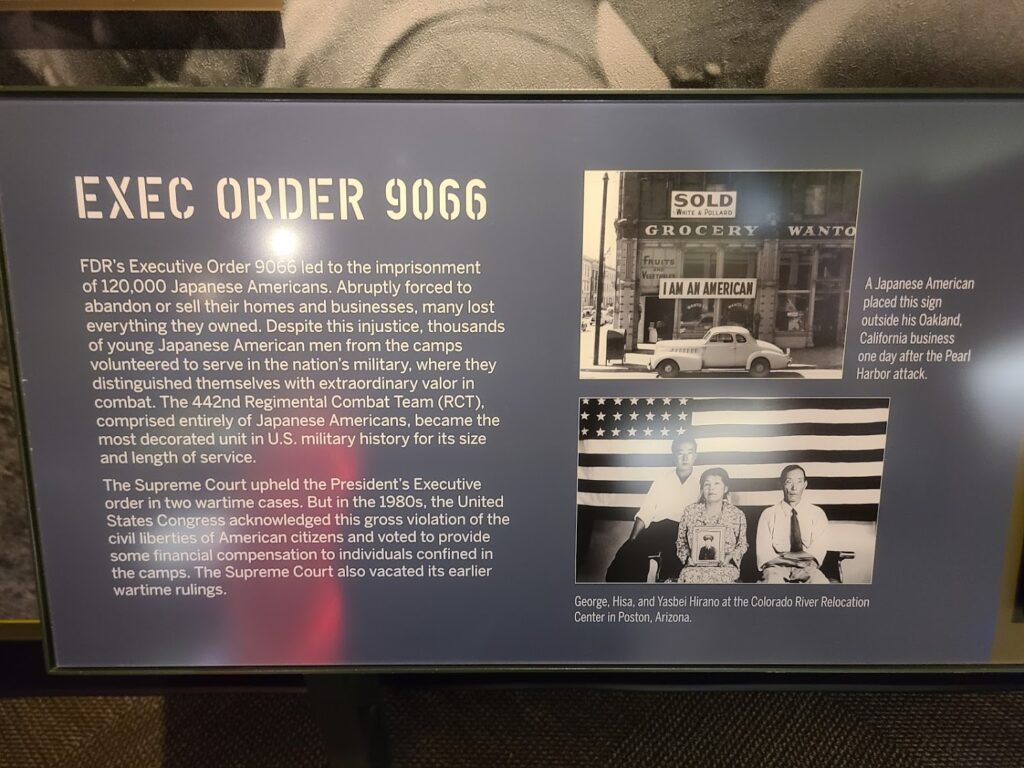 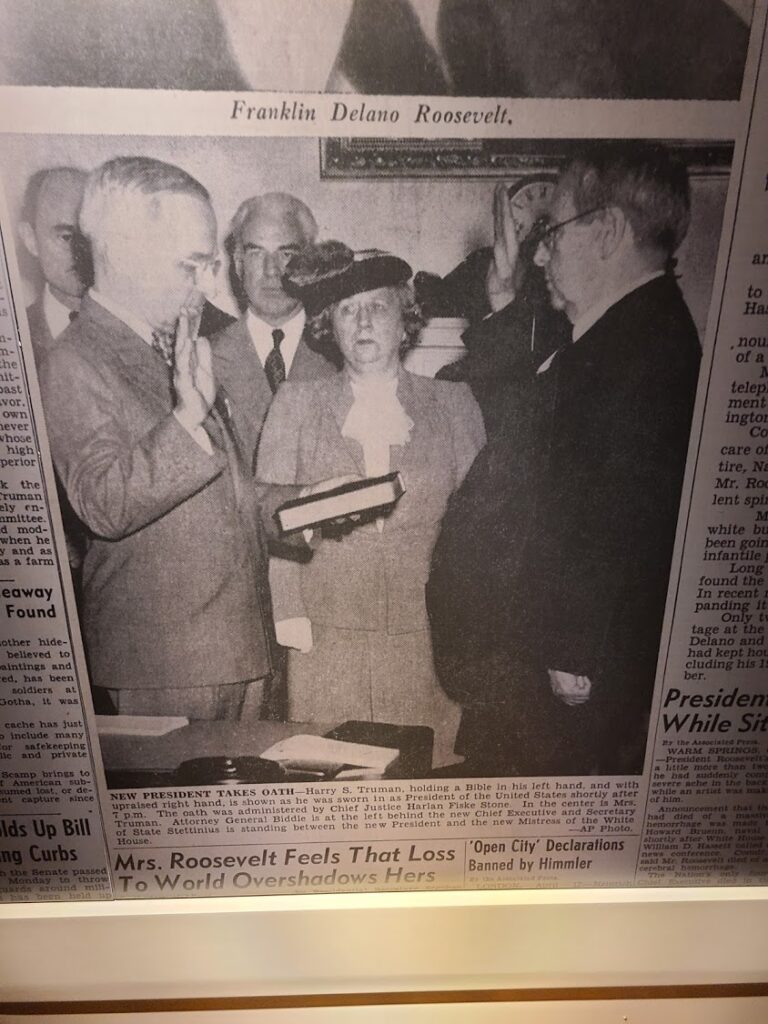